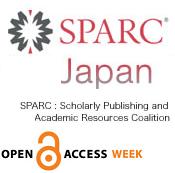 Export to Outlook or iCal (.ics)

Outline:
From October 18 to 24, events for promoting open access will be held throughout the world.
The 6th SPARC Japan Seminar is titled "Open Access disseminated from Japan," and we wish that it will provide an opportunity to discuss how research results in Japan should be disseminated both for now and in the future.
We hope that many can participate in the seminar!

The "Basic Guideline" states that, as part of the efforts for "realizing a research environment that is at par with the international standards," it is important to promote the institutional repository and open access.
It also stipulates that, as part of the efforts for establishing the "policy for science and technology that are developed together with citizens," it is necessary to have a framework in place so that researchers release the outline and results of their studies in an easy-to-understand manner.
In line with the "Basic Guideline," three speakers will make presentations, which will be followed by the general discussion.

RSVP for Open Access disseminated from Japan to add comments!